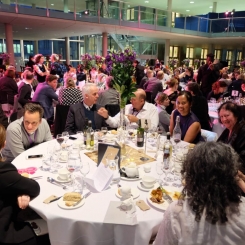 The delegates gathering over lunch, in the wonderful Nottingham Trent University Newton building, felt exciting and full of promise - people from all over the world meeting for creative conversation. There was a buzz, a feeling of a club or a group that were at one with the setting and the subject.

As I sat in the introduction session things didn’t feel different to many conferences I have been to before. Even a conference about creativity needs to deal with the housekeeping, the introductions and vote of thanks. It made me think that in all sectors people want more; they are asking the same questions about how we can bring more creativity into our lives.

The call for papers was interesting and the abstracts for each of the speakers were a varied mix, an enticement for the actual academic presentations. With the keynote speakers, things started to get more fascinating. This got me thinking just how tricky presenting about creativity can be – and that actually presenting creativity is really difficult. I wondered how the key note presenters would manage this?

Some people have an amazing ability to present – in fact they can simply talk about their work in a way that simultaneously explains, inspires and challenges - creatively. Dr Daniel Glaser from the Science Gallery in London was just this kind of speaker. The Science Gallery is definitely a must to go-see when it opens. However, Daniel’s discussion of how they had engaged ‘hard-to reach’ audiences was not exactly a new idea in the field of creativity learning, but certainly inspiring, with clear pointers – he managed to bring the gallery to life in his presentation. As did Wolfgang Buttress whose work is currently being installed at Kew Gardens after its spectacular outing at the Milan Expo. The Hive (the title of his artistic creation) connected Milan with NTU Brakenhurst through bees, music, modular building construction and team working - the results breath-taking. It was a clear reminder of the value of going out to see things that fire up the brain and take you into an unexpected or different realm. 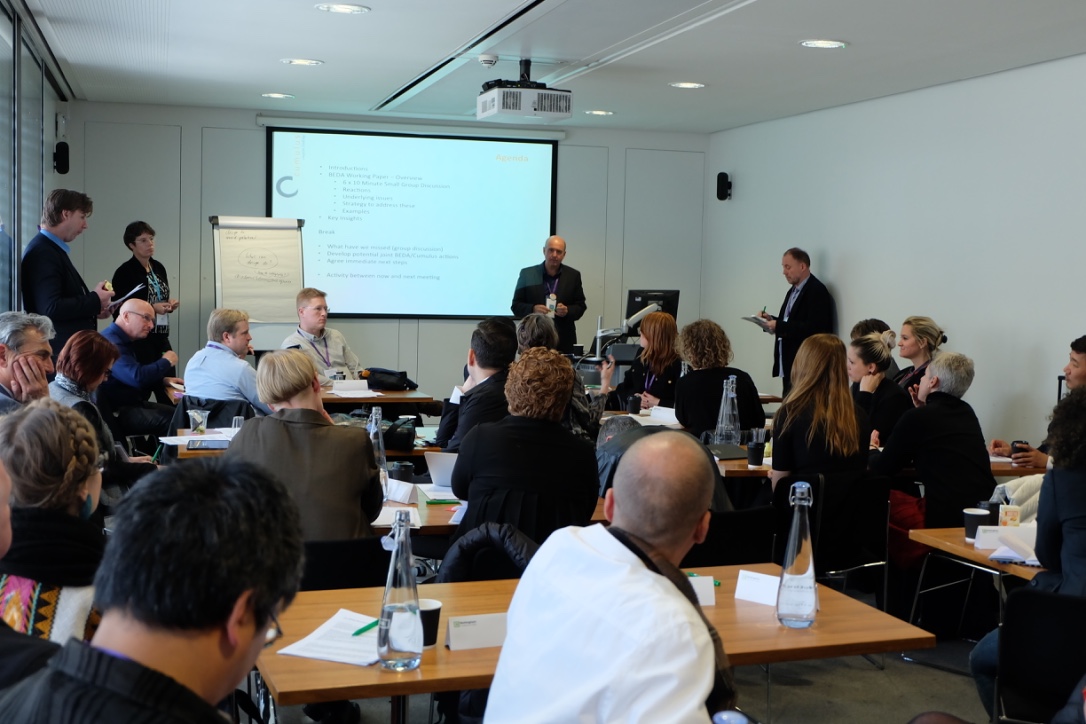 Then in the Academic Sessions there was a strong selection: Future Craft, Future Space, Negotiating Artefacts, Innovation and Sustainability. Tim Rummage, from Ringling, Sarasota talked about the mega challenges facing the world in terms of sustainability, a great flowing presentation that made total sense of ‘the brief’ and the theme.

Through the following days I chose several presentations. I have to say that not all lived up to their billing, again bringing home the challenge of presenting and talking about creative projects – so often it has been the being there and doing that makes the change and galvanizes people’s creativity. It’s very hard to then tell someone else about it. Creativity communication is a skill in itself. We had an engaging Skype presentation from Yvette Vaughan-Jones of Visiting Arts. She talked about the Square Mile Project which succeeded in highlighting the ways in which artists can inject creativity into communities. Later in the day there was the wonderful Never-ending Project which showed international collaboration at its most dynamic, in the virtual domain, a real glimpse to the future.

Another element of the conference that I was looking forward to exploring was the stands of the Cumulus members. Strangely these were not creatively presented at all - the norm seeming to be a table, a prospectus and a member of staff, and in some cases no-one. I wondered if the delegates themselves and the myriad conversations sparking up in every break just meant that the stands were not altogether necessary.

The key messages for me were that the ‘mash-up’ really works, but critically, in the mix of Science Technology, Engineering, ARTS and Mathematics – it’s the arts that makes the difference. However, there is a need for interlocutors or interpreters to ease collaborations, along with allowing specialists to work in their own specialisms - this will really bring success. The ‘partially permeable membranes’ are so important but the bringing together of people from different ‘places’ is what has the most pay-off for creativity. I’d love to see conferences like Cumulus embrace a mixed audience in the future, to see some businesses or community groups engaged in the future to take creativity to the next level. 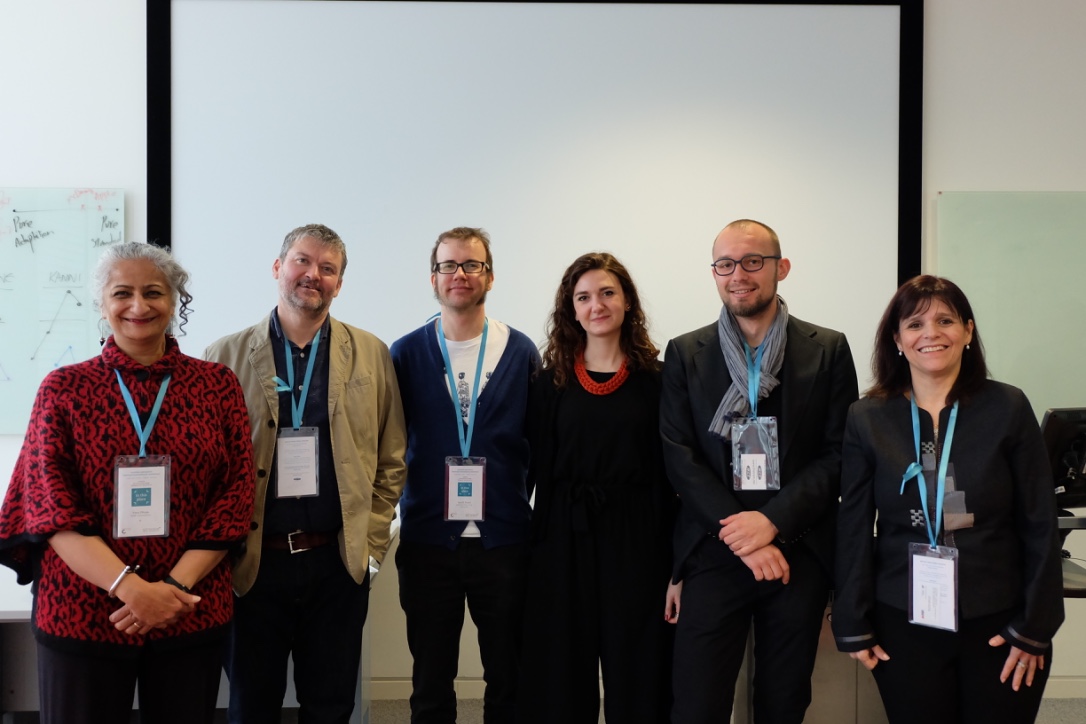 Bringing together people with deep understanding in their own field is clearly crucial. I am so often surprised and delighted by how people have arrived in their current roles and how creativity has played a part in this. Giving people respect and time to work things through is critical to really creative outcomes... and then of course having people who can see a way to move things forward to the next stage, and take thinking into other fields.

Facing real world issues, having real problems and real challenges to be solved is essential for developing creativity as the presentations discussed. There has to be a purpose for creativity to flourish. This isn’t new thinking, but it’s hard to get right. As the presentations demonstrated, there are lots of opportunities out there – and being creative in response to a brief will help.

Universities clearly have a great role to play in facilitating creativity. These organisations can facilitate civic responsibility by hosting people from different places – but even locally this will work. Creativity has to embrace all comers in regard to ‘place’. So for the next Cumulus conference I’d urge an even wider audience to truly push the development of creativity – a different kind of conference?

As with all these events one thought leads to another, serendipity strikes and Sir Ken Robinson, doyen of creativity in education popped up in a Sunday supplement article as I was on my way to breakfast. This got me thinking about just how long I have been considering creativity. How to generate creativity is an ongoing issue but we so often feel there is a final fix. Ideas, such as keeping a sketch book, set alongside the tech. generation and the impact of social media... older and younger, I think we are probably all on a journey with regard to creativity. Perhaps I thought I’d get the definitive answer from Cumulus, In this Place, but I realise that there isn’t a finishing line, the debate must and will continue. Sharing and keeping the debate going through initiatives such as this journal and organisations like Cumulus is vital. We must also encourage debate to be cross–sectoral, multi-disciplinary, as well as international, for real learning and change. It’s this which excites people to go and try to do it again and again.