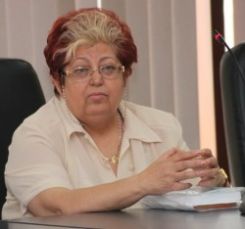 Some months ago, before the journal was launched, we sent out a questionnaire to find out what people might want from it. All the respondents were entered in a free draw and one was chosen at random to win a free annual subscription to the journal. We're delighted to announce that the winner of the competition is Dr Mariana Caluschi, Professor in the Faculty of Psychology and Educational Sciences at Petre Andrei University in Iasi, Romania. Many people don't realise that there is a strong tradition of creativity research in Romania, in fact many of our site visitors are Romanian. Dr Caluschi is the author of several creativity books including The Small Group and Creativity andThe Creative Group: experiments, programs, projects both published in 2001 by Cantes Publishing, Iaşi. We're delighted to welcome her to our growing community of subscribers!

Dr. Mariana Caluschi is Professor in the Faculty of Psychology and Educational Sciences at Petre Andrei University in Iasi, Romania.

Mariana graduated from the Faculty of History and Philosophy, at the University Alexandru Ioan Cuza, Iasi, in 1969, and obtained her PhD in 1998. Before she started her current job in 2000, she worked as a psychologist, an educational and vocational guidance counsellor at a high school, and then as a researcher, and senior researcher at the Romanian Academy, Iaşi Branch.

Dr. Mariana Caluschi has authored or coauthored 34 volumes, many of them on creativity topics, such as: The Small Group and Creativity and The Creative Group: experiments, programs, projects both published in 2001 by Cantes Publishing, Iaşi. For her book The Manager Inventor, regarded by the author as a new profession, she was awarded the Constantin Radulescu Motru distinction of the Romanian Academy in 2005.

Throughout her professional life, Mariana's main interest has focused on knowing and promoting the cultural values of the Romanian people, which she likes to name 'honor and the Romanian soul'. This is substantiated in the books she has published, in her activities - organising courses, workshops and conferences (in both Romania and Moldova), and in her involvement as a founding member of the Cultural Association Partitions Astra Mihail Kogălniceanu. In the same context, she has promoted the values of some great Romanian people (see her didactic model, inspired from the thinking of sculptor Constantin Brancusi).

Mariana has been an active organiser of the international conference 'Kreatikon, Creativity, Training, Performance', now in its 10th edition. This is the result of collaboration between universities in Romania and the Republic of Moldova, the County Inspectorate of Iaşi and the Pre-university education units. She has edited the 10 volumes of the conference proceedings.

In 2007, she initiated the National Family Association of Romanian psychologists, whose president she is. This Association organises courses and training to promote family values. Together with her colleagues, Mariana Caluschi also proposed a creative psychotherapy, Curative Therapeutic Cube, aimed at reducing injuries through love, forgiveness and creative strategies. This psychotherapy was awarded a gold medal and diploma at the International Exhibition of Inventions in Science, in Iasi, 2009.

More in this category: « Video - Making your workplace more productive and enjoyable Never standing still »
Login to post comments
back to top