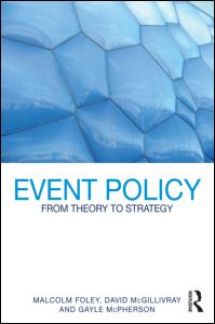 This is an important and very useful contribution to the public policy debate around large-scale events. It has encouraged me to reflect on my experience of large-scale events and programmes as a practitioner and policy maker in a way that only the best books do. Crucially, it approaches the questions from the point of view of the policy implications and the Political and social implications. With a general concern in this genre on management, these angles have been missing from the public or academic arena and therefore this book distinguishes itself in content and quality from others.

The book is set out clearly, divided into parts and bite sized chapters with chapter summaries and pointers to other resources. This gives a clue that it is organised for the academic reader, but this is also essential reading for anyone involved or who wants to be involved in national agencies or national and regional bodies considering large events. The case studies give colour and life to what might otherwise be a dry discourse and they highlight the theoretical points made in the wider context.

Part 1 deals with three areas: The rationale for large events, their form and function and their capacity for economic and social regeneration of urban environments. The authors have drawn on data collected through monitoring and evaluation from the bodies charged with the delivery of such events. This in itself inadvertently highlights that public investment in these is highly contestable and there is continued pressure on such bodies to justify investments for Political purposes.

This section raises key questions for me that are not then fully unpacked. Either because evaluation does not exist or they enter the realm of subjective philosophical debate that may not be the overall purpose the authors intended. However, these questions, I posit would be essential and more engaging for the advanced reader. For example, the book talks about events in a 'pre-industrial and a 'post-industrial' era, but by 'post-industrial' do they really mean in an era where Capitalism dominates? Where in order to justify themselves events are increasingly removed from the people and grass roots social involvement in favour of a formulaic approach for the purposes of generating sponsorship income, brand value and more tourist revenue. How does this approach relate to the ethics of large-scale events? Where once they were in community ownership (with all the associated messy complexity and diversity) many now reflect the dominant social norms, or even a culture manipulated for the brand image that a country wants to promote. What do we think about this? These tensions reveal themselves further in the examples drawn from say Dubai and Singapore. I am lucky enough (or old enough!) to have experienced the Thaipusam festival in Singapore first-hand in the 1960's, when it was a chaotic, visceral and a clearly spiritual experience. Now, and as this book examines it, it is a branded sanitised event, one of many in a crowded Singapore Government calendar that is driven by national or 'city boosterism' which is a relatively recent phenomena and one that the book discusses. When events are hijacked from the community in this way or used for propaganda purposes, one might end up with the positive regenerative effects of say, investing in rebuilding parts (and only parts) of New Orleans, or one may end up with the display of extreme ideology such as that of the Olympics of the Nazi era. So what do we think about this?

The book refers to these large events as being seen as Cultural Diplomacy but really only in terms of National Branding and then makes no detailed further examination of this. Is it acceptable in terms of diplomacy that the human rights issues in China and Tibet are ignored in favour of big business getting an 'in' to the Chinese market? Is it acceptable that Dubai promotes large-scale racing events yet at the same time pays migrant workers a pittance to construct and deliver them? And has notably draconian labour laws for these workers? Subsequently can the brand values of the big corporations (and I include the International Olympic Committee and FIFA in these) that 'own' these events remain intact? Sometimes the issues are far more practical, for example, is it fair that the Edinburgh International Festival performers are exempt from the visa process applied to other festivals in Scotland because the festival is heavily sponsored by the Scottish Government? Is it fair that the London Olympics was sold to the IOC on the ticket of celebrating diversity when the power brokers of the cultural and sporting elite in England are far from diverse? And when tickets for the showpiece events are not subsequently available to the diversity of the population? These practical and moral dilemmas (which are all too often dismissed or remain un-discussed by the Politicians) are the real dilemmas of international cultural policy and Cultural Diplomacy and in this book they are not examined. This places the book at the intermediate policy level rather than the most strategic policy level. And points up the main agencies and politicians concern with matters that ensure successful implementation of the events rather than concern with success in policy terms. We need intellectual discussion on these issues and a book that places itself as international and does not tackle these questions could be judged as neatly reinforcing itself as a book by academics for academics.

Further on the book examines in more detail the main themes and uses more examples to look at the realities of branding, entrepreneurial event policies and events as catalysts for visitor numbers and so forth. It examines the impact on Civic pride (though this can be self-fulfilling) and it acknowledges that the social benefits are less well defined and less tangible and that there are winners and losers in this top down model. It doesn't reflect on whether income generation or social and individual benefit are more or less valid reasons for continued public support? Nor does it discuss the kind of evidence that might reveal public opinion on this, which directly relates to civic pride. It avoids reference to the land issues or individual rights to access issues to sites or their commercial annexes at national or community level, which are unseen social consequences of these large events and are matters of public policy. Finally, although the book places itself internationally and uses a range of international examples, there are notable parts of the globe (where post-industrial gatherings happen) that are missing, for example China, the Caribbean and the bulk of the African continent. Disappointingly, despite the international examples, the book is not written with an international sensibility and this reveals itself throughout.

In summary, this book is an original and bold addition to the examination of events and their associated cultural policy. Despite the issues I raise above, I took pleasure from this book. It is unintentionally provocative, useful, and in my view should be an essential read for anyone who wants to be or considers themselves to be a serious operator in the creative and cultural sector. It lays a sound and rich foundation for further questions for the more sophisticated reader. Towards the end of the book, the authors venture tentatively into more nebulous or controversial policy territories and perhaps deliberately and tantalisingly hint at a further publication where they may have the courage to discuss the resulting issues head on. I hope so and I for one look forward to it.

More in this category: « The Little Red Yellow Black Book Third Edition The ethics of creativity »
Login to post comments
back to top