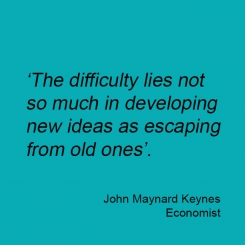 Essential to discovering and cultivating new ideas is the act of extinguishing the sources of old ideas that have failed to inspire solutions. New ideas can then be accessed in territories far removed from old hunting grounds.

‘The difficulty lies not so much in developing new ideas as escaping from old ones’. (Economist, John Maynard Keynes).

At its core, creativity is much less a generative act and far more an act of recognition. This recognition skill lies in the ability to look at something apparently unrelated to a problem and discover there an exciting connecting pathway to a solution.

In helping businesses solve difficult and persistent problems, I have discovered that it is not any lack of ideas that prevents even very bright people from finding solutions. Instead, one of the biggest roadblocks to new and creative solutions is not conjuring new ideas but in ridding the brain of those already embedded. As Charles Darwin, who proposed the theory of evolution through natural selection, put it, ‘To kill an error is as good a service as, and sometimes even better than, the establishing of a new truth or fact’.

My whole ‘Cruising to Aha’ process mimics Charles Darwin's three-step Natural Selection Process: extinction, mutation, and selection. In his 1859 book, On the Origin of Species, Darwin says, ‘All creatures adapt to an ever-changing world by a process called Natural Selection... As species adapt from generation to generation, nature selects those better able to survive than... their competitors’. This article concerns itself with the first of this three-stage process: extinction.