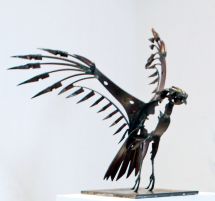 Hen Harrier by Helen Denerley Photo by Peter A Welch

Most of the residencies are designed and delivered by partner organisations and businesses across the public, private and voluntary sectors, who bring a wide range of ideas and special expertise to projects. Individual practitioners come from any realm of the creative industries and cultural sectors – from artists and writers, to gamers, curators or designers, to entrepreneurs and cultural managers.

Residencies and related activities make up the core of the programme, and there's a range of more R&D-focused projects to help us to 'see the future differently', and to identify creative opportunities in a rapidly changing, complex and unpredictable world. There is no fixed model for what a residency should involve, but common to all projects is sharing, learning and growing, through interaction and collective development. In the long term we aim to raise awareness and understanding of the importance of talent development, not just to the individuals who benefit, but to the wider economy, culture and society.

We look for proposals that put individuals together with new people, ideas and situations, proposals that encourage them to explore their own craft and ideas in a new direction with inspiration from other people – sometimes from their own discipline, sometimes another discipline, or another sector entirely, or even another country or continent. 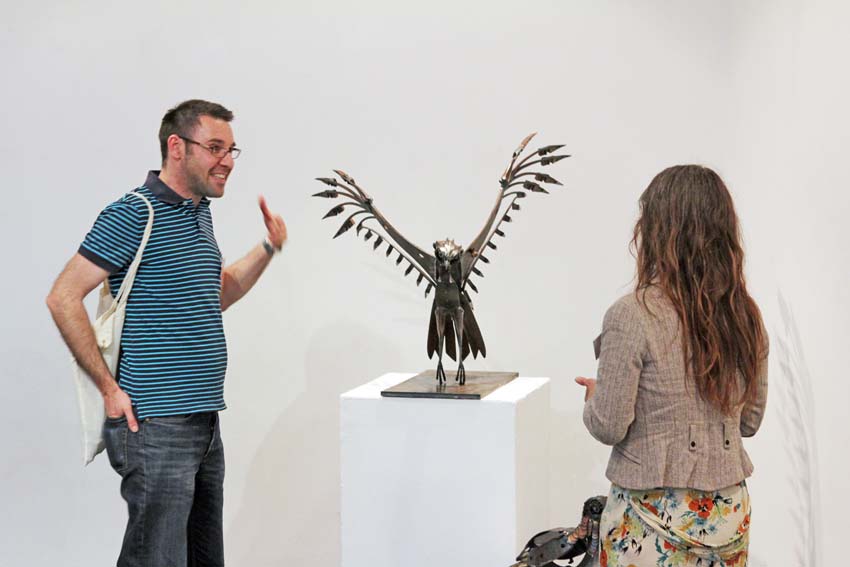 So, no two residencies are the same... they can be short and intense or long-term projects. They are spread far and wide across the globe, from Rome to Ahmedabad, Finland to Australia – and of course, on our home turf of Scotland. Some projects focus entirely on one art form; some bring several art forms together, exploring the possibilities of collaboration; many projects engage directly with the wider world of the environment, health or the economy; others are building international relationships and intercultural dialogue; and some are looking to improve the cultural sector's ability to navigate an uncertain and rapidly changing world.

Creative Futures projects are profiled on the Creative Futures HQ site where they share ideas, learn from others and make connections. Combined with long term independent evaluation of the programme and self evaluation by each project, this helps us to better promote and understand every aspect of talent development.

That's the theory and the aspiration, but what does that look like in practice? With around forty projects a year, there's only room to mention a small sample, but here's a few to give some sense of the programme's variety and range.

This large scale three-year initiative of Scotland's dance agencies working together aims to develop choreographic talent across Scotland: Aberdeen's Citymoves, Edinburgh's Dance Base, and The Work Room and Dance House in Glasgow teamed up to provide development opportunities for emerging talent as well as more established choreographers over three years, starting in 2011. The collaboration across the dance agencies was especially attractive to Creative Scotland, with the synergies and national ambition that promised. In sharing their work, ideas, contacts and networks, the four agencies are learning from each other, and building the development capacity of the sector as a whole, as well as supporting the careers of individual talent.

Documentary fellowships at the British School at Rome

Growing our international networks and resources is a key aim for Creative Scotland, and for Creative Futures. One of the programme's international delivery partners is the British School at Rome (BSR), where a single three-month fellowship in documentary photography early in 2012 will expand next year with a new fellowship in documentary film to add to the photography fellowship. The BSR is an ideal delivery partner, with its mission 'to promote knowledge of and deep engagement with all aspects of the art, history and culture of Italy by scholars and fine artists from Britain and the Commonwealth, and to foster international and interdisciplinary exchange'. The BSR (unlike, for example, the better funded French and German Academies in Rome) is a community, a learning community, which brings the residents together to collaborate and learn from each other. And a city of such wonderful and terrible extremes offers almost unlimited creative inspiration for artists. 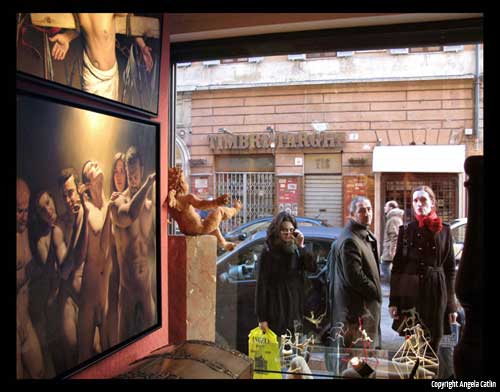 This year's BSR fellow, the extraordinary photographer Angela Catlin, said of her experience: 'The support of Creative Futures gave me the opportunity to... broaden, deepen and refresh my craft. For the past 25 years I have been firstly a press photographer and subsequently a freelance, focussing on humanitarian and social issues... Already I feel a sea change in my life; a desire to push in different directions and experiment in a way that I wouldn't have considered before.'

Scotland's Playwrights Studio developed the 360 Narratives project, which gives writers and narrative creators the opportunity to work together to create characters and worlds which can be exploited across a range of different media, in physical and/or virtual forms – a book and a film, a game and a graphic novel, a children's picture book and a play...

After an open residential weekend attended by 50 self selected participants, small teams developed new project ideas and applied for the week-long residency, during which the six selected teams worked up their projects, supported by a range of tutors, through a series of sessions on narrative development, rights exploitation, publishing and distribution, business plans, marketing and pitching.

Claire Dow at the Playwrights Studio: 'It is so special to see strangers share their working methods and ideology; and to see some adopt new ways of looking at their work, and how they create it. It is exciting to give people permission to try new things, and to break out of their pigeonholes. 360 Narratives is a safe place to experiment across forms: we have playwrights writing graphic novels, screenwriters building websites, artists trying apps, novelists working on radio dramas.'

Libraries can be the heart of a community, a place where people from all walks of life can meet, learn and get involved with local groups. However, if we are to ensure their future and fulfil their potential when communities, leisure habits and information technologies are changing so quickly, the role of libraries must be fully understood and valued.

As project lead, Glasgow School of Art's Catherine Docherty puts it: 'Libraries and the variety of services they provide are poorly understood. As a valuable cultural asset we need to celebrate, review, rethink, reshape – re-imagine them to make sure they meet the needs of all our citizens, present and future.'

The Innovation in Libraries project turned to Scotland, London, Helsinki, Singapore and the Netherlands to explore how library services can best meet the needs and wants of today's users. Using a design innovation approach, senior managers and nine librarians from three library services explored new thinking and developed new ideas for Scotland's libraries.

Creative Futures made it possible to explore an innovative approach to exploring a well-established public service. It also attracted important partners in Scotland which provided a useful profile when arranging international trips, including meeting with senior government officials in Finland and Singapore.

It is vital that the arts are fully engaged with the wider world around them, and cross-sectoral projects form a significant proportion of Creative Futures. One such was part of an international and inter disciplinary conference, 'Conflicts in Conservation', in Aberdeen in August 2011, when four creative practitioners explored those conflicts over an extended period with natural and social scientists from the organising research network, the Aberdeen Centre for Environmental Sustainability, and from other interested organisations. Some of the artists' creative responses to the conservation issues were played, exhibited and read as an integral part of the conference.

Like the cross sectoral projects, the Oxygen series of talks and events is part of the programme's horizon scanning, bringing major international speakers and issues to engage a wide range of audiences across Scotland. Most of the speakers come from outside the normal creative and cultural sphere, and we aim to attract diverse audiences with a wide spectrum of interests, with most speakers doing two events in Scotland and one in London. 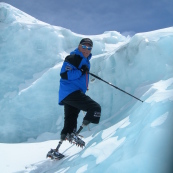 Speakers so far have included Mark Inglis, a mountaineer, trekking guide, scientist and winemaker, and the only double amputee to stand at the top of Mount Everest. A packed house saw him at the CatStrand in Castle Douglas, then he was in Huntly with Deveron Arts for a talk at the Gordon Arms, followed up by a long walk with local people. 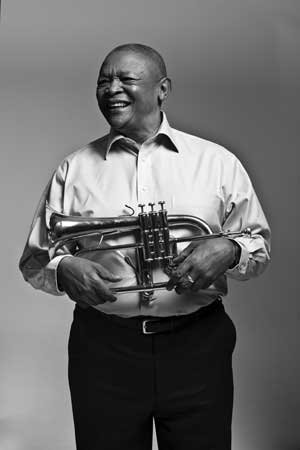 The South African musician Hugh Masekela is routinely referred to as a legend, and his visit to the Fruitmarket in Glasgow for a conversation with Hardeep Singh Kohli was extremely moving. Josephine Rydberg-Dumont, one of the chief architects of IKEA's success in the 2000's, spoke at Duncan of Jordanstone in Dundee. 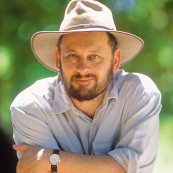 Tim Flannery is one of the world's most important scientists and writers, and his page-turning ecological histories of Australasia (The Future Eaters), North America (The Eternal Frontier), the climate (The Weather Makers), and the whole planet (Here On Earth), provide the biggest of big-picture histories of life on this Earth. Tim spoke at the Royal Society of Edinburgh and the James Hutton Institute in Aberdeen, and you can see a transcription of his conversation here: http://www.royalsoced.org.uk/1028_April2012.html.

But what is talent development anyway?

During this year's Edinburgh Festival, NT Creative Arts and Triggerstuff developed and presented a two-day lab for Creative Futures, bringing together a wide range of individuals and organisations with a wide range of interests and experiences in talent development. The purpose of the event was to explore talent development from first principles, approaching these from four themed perspectives: context, resources, diversity and failure. Key elements of the lab were captured and can be seen here http://storify.com/TriggerStuff/lab, and will inform Creative Scotland's further examination and re-examination of talent development. 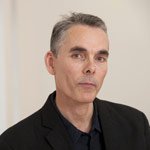 Scott is a Portfolio Manager at Creative Scotland with a background in education, film, photography, and environmental science. He has taught film, photography and media in colleges in London and universities in Scotland, programmed cinema and education at Macrobert, Stirling, and, while at Scottish Screen (1997-2010), developed and promoted moving image education and media literacy across Scotland. The Creative Futures talent development programme is currently a major part of his portfolio at Creative Scotland.

More in this category: « The Nature of the Arts in Human Development Why I Write »
Login to post comments
back to top