Developing Cultural Industries: Learning from the Palimpsest of Practice Featured 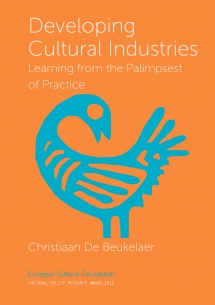 Christiaan De Beukelaer’s comprehensive study of the music industry in Burkina Faso and Ghana is both enlightening and informative, highlighting the problems encountered regarding piracy, royalties, and cultural funding in ‘developing’ countries – a term which De Beukelaer rightly derides and dismisses as misleading and unhelpful. This book covers the historiography of concepts such as ‘culture’ and ‘development’ in relation to cultural studies, before addressing the etymology behind the semantics of such terms themselves, and suggests that a better understanding of terms such as the ‘creative economy’ and ‘cultural industries’ is required for better results.

Following on from five years of research in these African countries, De Beukalaer efficaciously argues that part of the problem with the cultural industries of ‘developing’ countries such as Burkina Faso and Ghana is the application of western hermeneutical policies and theories without proper consideration of what was there in the first place, regardless of whether those policies worked, or did not. This is where De Beukelaer’s analogy with the palimpsest of practice comes in: if previous strategies did not work, they should not simply be ignored, but they should be used as part of a new strategy in order to avoid making similar mistakes. De Beukelaer makes the pertinent assertion that examples from these countries’ cultural industries can be used along with western models to tackle global issues of cultural policy, and suggests that the way forward for the music industry in Burkina Faso and Ghana would be for them to integrate music piracy legitimately, citing the success of Nollywood in Nigeria as an example of how this approach can be successful.

De Beukelaer postulates a convincing theory of adopting a circular logic concerning cultural industries in protean socio-economic frameworks in non-western countries such as Burkina Faso and Ghana, and, that the current predicament of the music industries of these countries where piracy is prevalent, is far too much of a ‘vicious’ circle, instead of what could be a ‘virtuous’ circle. In particular, De Beukelaer is critical of myopic dichotomisations of northern and southern countries as ‘developing’ and ‘developed,’ suggesting that development itself is a circular, not linear, process. The book concludes with a call for a ‘variety of voices in artistic and creative expressions’ and how mutual learning should not be based on the status of a country’s cultural economy. De Beukelaer also places emphasis on the need for clarification on what the concept global creative economy discourse actually means, and indicates a need for greater engagement with historical cultural issues and contemporary practice.

Christiaan De Beukelaer’s book provides us with an in-depth study of the music industries of Burkina Faso and Ghana, and deftly uses examples from these countries in order to address an important link between cultural industries and human development on a global scale. By combining statistical empirical evidence and textual analysis of policy documents, De Beukelaer elucidates his point regarding global cultural debates and national policies. Overall, an excellent addition to the global cultural industries debate, and, at the same time, a very useful introduction to those new to the debate.

Read 31121 times
Published in Book Reviews
More in this category: « The ethics of creativity Creating Futures That Matter Today: Facilitating Change Through Shared Vision »
Login to post comments
back to top