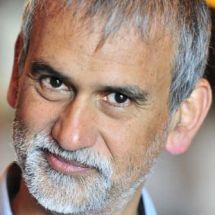 Mike van Graan graduated from the University of Cape Town (UCT) in the early eighties, having majored in English, and with a BA Honours degree in Drama. He is currently registered at UCT’s Drama Department for a Masters degree where he is exploring the (relative absence of the) theme of HIV/AIDS in mainstream, professional theatre since 1994.

Prior to the country’s first democratic elections in 1994, he served in leadership positions in numerous anti-apartheid cultural NGOs such as the Community Arts Project, Congress of South African Writers and the National Arts Coalition. He was appointed as a Special Advisor to the first Minister responsible for arts and culture in Nelson Mandela’s cabinet, where he played an influential role in helping to shape post-apartheid cultural policies.

He currently serves as the Secretary General of Arterial Network, an Africa-wide network of artists, activists and organisations engaged in the African creative sector, and its contribution to democracy, human rights and development. He is also the Executive Director of the African Arts Institute, an NGO that harnesses South African resources, expertise, infrastructure and markets in support of the development and sustainability of creative practice on the African continent. He served as the Programme Director for the fourth World Summit on Arts and Culture hosted by the International Federation of Arts Councils and Culture Agencies in Johannesburg in September 2009.

He is also an award-winning columnist, having provided extensive and provocative commentary on arts and culture developments in post-apartheid South Africa.

Van Graan is considered to be one of South Africa’s leading contemporary playwrights, one of a few dealing with the ironies, contradictions and complexities of a society in transition. To date, he has created 19 stage plays (all after the release of Nelson Mandela) of which 13 (70%) have been nominated for, or won awards. In the last five years, his scripts have been nominated in the country’s two major theatre awards – the Naledi Theatre Awards in Gauteng (three times) and the Fleur du Cap Theatre Awards in the Western Cape (four times), pointing to a consistency of quality in the work produced. In that time, he has also received six commissions, four for locally-produced plays, one from the BBC and another from De Appel Theatre in The Hague.